For the Kentucky Derby, as with many recurring events in my life, there are certain rituals that must be observed.

Mint juleps, however, are not one of them. Not that I really mind mint juleps. But just as Jack Nicholson, in the classic diner scene in Five Easy Pieces, tries unsuccessfully to order a chicken salad sandwich without the chicken salad because what he really wants is a side order of wheat toast, I simply prefer my mint juleps without the mint. Or the simple syrup. Or the crushed ice.

Unlike Jack, I do manage to get my bourbon—Maker’s Mark has long been preferred in my family. If I’m feeling extravagant, maybe I’ll put an ice cube or two in it. Provided they’re very small ice cubes.

Over the years, I have found that bourbon is the perfect complement to one of my favorite Kentucky Derby rituals: spending time with the late Hunter S. Thompson’s savagely funny and enduringly influential magazine article The Kentucky Derby Is Decadent and Depraved, first published in Scanlan’s Monthly in June 1970 and reprinted almost a decade later in the essential Thompson collection, The Great Shark Hunt. (Read the article in its entirety on Grantland, which sadly has joined Scanlan’s in the literary boneyard where great writing goes to die.) 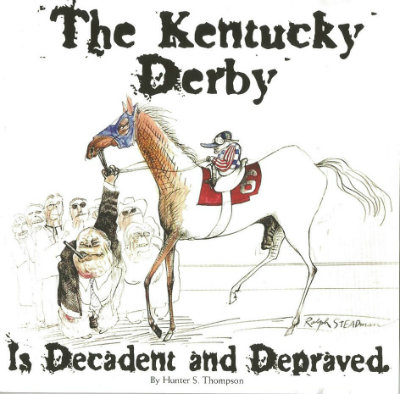 For years, the annual Run for the Roses would compel me to pull Shark Hunt off the shelf for a return trip to the Big Bang of Gonzo Journalism, what the novelist William Kennedy, a longtime friend of Thompson’s, called “the great mother lode. Hunter had discovered that confounding sums of money could be had by writing what seemed to be journalism, while actually you were developing your fictional oeuvre.”

Thompson, in a letter to his editor and mentor, Warren Hinckle, writes: “I just read over the Derby article for the first time and it strikes me as a monument to whatever kind of limbo exists between humor and tragedy.

Indeed. Hunter S. Thompson’s writing during his creative peak (which I would date from the publication of Hell’s Angels in 1966 through at least Shark Hunt in 1979, with flashes of brilliance from the 1980s until the end in 2005) proved to be a singular achievement. While Thompson spawned several generations of imitators, none have even approached his genius.

What far too many fail to realize is that Hunter S. Thompson was a gifted prose stylist who worked hard at his craft, at least until the point where the legend consumed the writer. But even in his declining years, before he turned his shotgun on himself in the dead of a cold February night in Woody Creek after football season was over, Thompson still loomed large over his legion of would-be successors, stomping them into the terra.

The Derby article also is significant because it marked the first time Thompson worked with the British artist Ralph Steadman, who would prove to be his perfect creative foil. The pairing of Thompson and Steadman did for publishing what the teaming of Keith Richards and Mick Jagger did for music.

In recent years, I have altered my ritual slightly, thanks to the release on CD of a dramatized reading of the Kentucky Derby piece that features an eclectic all-star cast that includes Tim Robbins as Thompson, Ralph Steadman as himself, Dr. John as the character Jimbo, jazz singer Annie Ross as the motel desk clerk, and SNL alum Will Forte as the car rental clerk.

Released in 2012 on Paris Records, the CD features a score composed and conducted by the great jazz guitarist Bill Frisell. It’s a marvelous production, bringing Thompson’s viciously chaotic comic scenes to life while hewing to the sacred text. I highly recommend picking up the CD for your collection. It’s also available to those of you on Spotify as well as to the masses on YouTube.

I found it to be the perfect soundtrack on what used to be my annual drive to the former Valley Forge Turf Club, my nearest OTB until it permanently closed in July 2020, to make my bets on Kentucky Derby day. Which brings me to the other essential musical accompaniment to the Derby: Dead Flowers by the Rolling Stones.

Well, when you’re sitting back in your rose pink Cadillac
Making bets on Kentucky Derby day
I’ll be in my basement room, with a needle and a spoon
And another girl to take my pain away

Yes, Keith and Mick knew a bit about the decadent and depraved … I may not make my Derby day bets from a rose pink Cadillac today. In fact, I did my betting online from the safety of home the past couple of years during the pandemic. It’s a poor substitute for the decadent charm of the old Turf Club. And fortunately I’ve never shared Keith’s one-time fondness for the needle and the spoon. But I have always loved this song, which inhabits that same limbo between humor and tragedy that Dr. Thompson mined so effectively. No Derby day is complete without it.

Enjoy this live version from London’s Marquee Club, recorded 50 years ago in 1971, featuring the best lead guitarist the Stones ever had, the brilliant and underrated Mick Taylor, happy, as always, to play his licks and leave the spotlight to the Glimmer Twins:

So enjoy your mint juleps and My Old Kentucky Home. I’ll be in my basement room, the one with the Elvis bar, with Maker’s Mark, Hunter S. Thompson and Ralph Steadman. And a bouquet of Dead Flowers.

Here’s an alternate version the Stones recorded that stayed buried in the vault for way too long. It features snarling lead guitar throughout by Taylor. And the video’s pretty cool, too:

Perhaps the highest praise I can offer Dead Flowers is that it’s so damn good it could have been written by the late Townes Van Zandt. It wasn’t, but he did cover it. And it’s his version that plays over the closing credits in The Great Lebowski:

And check out this version from 2002, featuring Keith and Willie Nelson with Ryan Adams and Hank Williams III tearing it up. Often, these all-star jams add up to considerably less than the sum of their parts. This is the rare exception:

4 thoughts on “Dead Flowers for the Decadent and Depraved”