In the iconic film “The Wizard of Oz,” the Wicked Witch of the West conjures a field of red poppies to thwart Dorothy’s entry into the fabled Emerald City, and foil her return to Kansas. Today, poppies like those are inflicting a plague of opioids across America, feeding an addiction epidemic that doesn’t discriminate based on race or income, or distinguish legal drugs (like those that took the life of actress Judy Garland) from the illicit. But thanks to a partnership between Alvernia University and Caron Treatment Centers, there is hope for some, and training for the next generation of addiction counselors.

I wrote the cover story for the new issue of Alvernia Magazine looking at the national opioid epidemic through the eyes of a smart, funny woman named Jennifer who lived through the hell of addiction for two decades before finally getting clean six years ago (sadly, her brother wasn’t so lucky), and through the experiences of the dedicated professionals at Caron Treatment Center (and the faculty and staff at Alvernia University who have taught and trained many of them) who help people put their lives back together.

It’s a harrowing tale, and it’s easy to get discouraged when confronted with the devastating statistics and the damage done. But it’s also a tale of life and hope.

I’d like to thank Steve Thomas, a wonderfully gifted designer who I had the intelligence to hire for his first daily newspaper job at The Mercury in Pottstown, Pa., way back in the early 1990s, for a dazzling cover design and splendid layout that surely wasn’t helped by my writing so many damn words.

It’s always nice to work with old friends. Especially when they’re really good at what they do.

I remember sitting in the kitchen of my parents home in Wilmington, Del., on that momentous March night in 1971, listening to the radio for the round-by-round bulletins from Madison Square Garden, where the Fight of the Century between Muhammad Ali and Joe Frazier was taking place.

I was rooting for Ali, just as I had rooted for Joe Namath over Earl Morrall and Johnny Unitas in Super Bowl III the year before, and just as I would root two months later for Marty Liquori over Jim Ryan in the Dream Mile at Franklin Field.

Like so many of my generation, I favored the brash, colorful, anti-establishment types, whether in sports, music, movies, TV, or writing. Lennon over McCartney. Jack Nicholson over John Wayne. The Smothers Brothers over Bonanza. And Norman Mailer over … well, just about everybody else. In my mind, then and now, Mailer was to writing what Ali was to boxing: simply The Greatest. 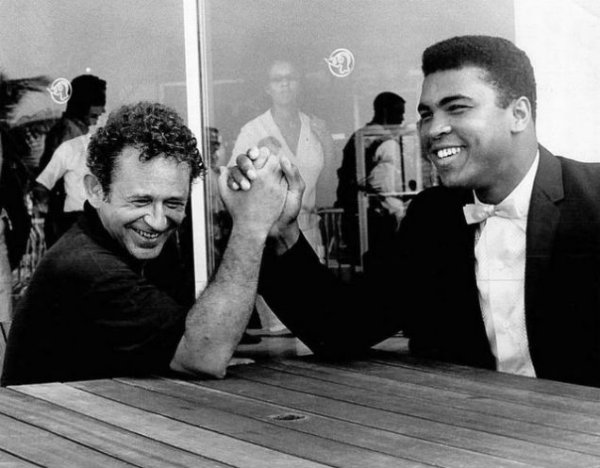 So when news came over the radio waves that Frazier had rocked Ali in the 15th round, sending him to the canvas, I felt disoriented and queasy. Sure, Ali had gotten off the canvas to finish the fight, but Frazier was the new heavyweight champion of the world. The only consolation was that it was clear even from listening to the fight that it had lived up to the hype, that it was truly something special.

So was the piece that Mailer wrote about it—10,000 words written in two days, which appeared first on the pages of LIFE magazine under the headline “Ego” (with ringside photography by Frank Sinatra) and, a month later, as a $1 Signet Special paperback titled King of the Hill. It’s a breathtaking exposition on Ego, boxing, African-American identity, what it means to be a man, and, yes, The Fight. That Mailer framed the article around the construct of Ego, which he called “the central phenomenon of the 20th Century,” makes perfect sense. After all, it was Mailer who wrote early in his career:

The sour truth is that I am imprisoned with a perception which will settle for nothing less than making a revolution in the consciousness of our time.

Even Mailer, in his later years, admitted he had failed to achieve that revolution, but it wasn’t for lack of effort or Ego.

Mailer had an abiding admiration for prizefighters and the price they paid to contend at the highest levels, and he brought a pugilist’s mindset to writing. He even had his friend José Torres, a former light heavyweight champ and Boxing Hall of Famer, school him in boxing in exchange for instructing Torres on writing. Yet, Mailer only wrote one other book about the sport he loved passionately—the highly acclaimed account of the 1974 Ali-Foreman Rumble in the Jungle in Zaire, titled The Fight.

It is a splendid book, one of the best ever on boxing, but I have always preferred Mailer’s coverage of the first Ali-Frazier fight. The piece is classic Mailer, brimming with passion, energy, intelligence, immediacy, and sheer audacity. The fact that it holds up so well 45 years later is a testament to Mailer’s genius. As we mourn the passing of Ali today at the age of 74, it is worth remembering how Mailer described him in the aftermath of the Fight of the Century:

He is America’s Greatest Ego. He is also … the swiftest embodiment of human intelligence we have had yet, he is the very spirit of the 20th Century, he is the prince of mass man and the media.

While Ali was certainly one of the most polarizing figures of his time, with his embrace of the Nation of Islam and principled refusal to fight in the Vietnam War, the fight against Frazier in Madison Square Garden changed the way America saw him and set him up to become the most popular athlete in the world.

The stakes couldn’t have been higher, and Mailer saw it clearly as the fight happened:

Yes, Ali had never been a street fighter and never a whorehouse knock-it-down stud, no, it was more as if a man with the exquisite reflexes of Nureyev had learned to throw a punch with either hand and so had become champion of the world without knowing if he was the man of all men or the most delicate of the delicate with special privilege endowed by God. Now with Frazier, he was in a sweat bath (a mudpile, a knee, elbow, and death-thumping chute of a pit) having in this late year the fight he had sorely needed for his true greatness as a fighter six or seven years ago, and so whether ahead, behind or even, terror sat in the rooting instinct of all those who were for Ali for it was obviously Frazier’s fight to win, and what if Ali, weaknesses of character now flickering to the surface in a hundred little moves, should enter the vale of prizefighting’s deepest humiliation, should fall out half conscious on the floor and not want to get up. What a death to his followers.

But when Ali did, in fact, wind up on the floor in the fight’s final round, he summoned the courage to get up and was still standing as the bell rang. And long before Ali-Frazier II, or the Rumble in the Jungle, or the Thrilla in Manilla, or carrying the Olympic torch in Atlanta all those years later, Mailer saw the future:

The world was talking instantly of a rematch. For Ali had shown America what we all had hoped was secretly true. He was a man. He could bear moral and physical torture and he could stand. And if he could beat Frazier in the rematch we would have at last a national hero who was hero of the world as well …

For more than four decades, that’s exactly what we’ve had in Muhammad Ali: a national hero who was hero of the world as well, the most recognized and beloved athlete on the planet. His final years were marked by quiet dignity in the face of debilitating disease, and he remained a beacon of perseverance and principle and pride, a shining symbol of freedom to the end.

And now he’s gone. But Ali’s legacy is assured, here in the land that had such a passionate love-hate relationship with him, and around the world. In terms of Ali’s continuing ability to inspire and challenge, death has no sting. Which shouldn’t come as a surprise, considering it can’t float like a butterfly, either.