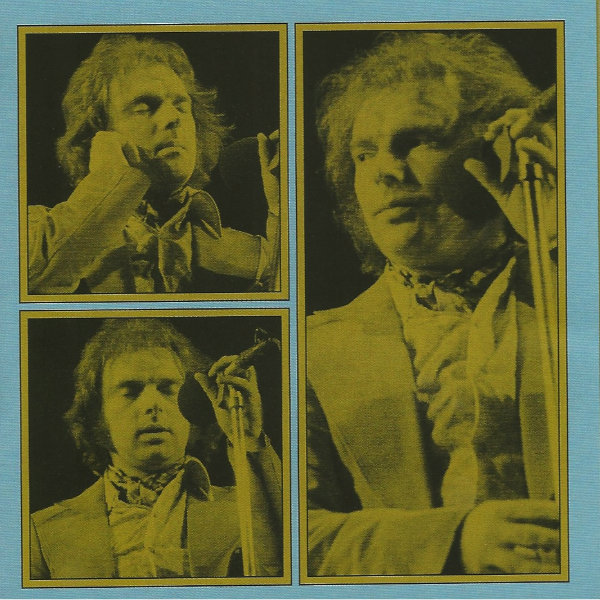 “If I should die in a car wreck, may I have Van Morrison on my tape deck.”

I heard the Poi Dog Pondering song U Li La Lu only once on the radio a quarter of a century ago, but that line has always stuck with me. I don’t have a tape deck in my car any more. But if I do get to choose the last singer I hear before shuffling off this mortal coil, it will be Van Morrison.

More than any other artist, Van’s music has been an integral part of my life since I was a kid. As the legendary rock critic Lester Bangs wrote in his famous liner notes for the 1972 two-record Them collection: “We have grown up to Van Morrison: gone through make-outs and periods of adolescent darkness, found rock poetry sans pretence in his lyrics, turned up our radios a little louder (as he counseled in “Caravan”) every time he came on, heard in his music hit singles and sheer art (though never “Art Rock”) and gorgeous combinations of the two.”

Yes. That’s exactly right. I have grown up to Van Morrison. I loved Gloria and Here Comes the Night, the hit singles from his first band Them that made the U.S. charts in 1965 and 1966, and first heard Brown Eyed Girl while on vacation on Cape Cod in the summer of ’67. Those “sha la las” blasting from a tinny transistor radio delivered fully on the promise of the title of Van’s first solo album–Blowin’ Your Mind. I remember the  transcendent experience of hearing Astral Weeks for the first time, and I remember playing the Moondance album over and over during my own periods of adolescent darkness.

I remember listening to Period of Transition in 1977, as I got dressed on my wedding day. I remember a harrowing weed and beer fueled high-speed car ride with friends from my first newspaper job in Dover, Del., in 1978 to see Van at the Tower Theater in Upper Darby, Pa., on the Wavelength tour. It’s a wonder that Poi Dog Pondering lyric didn’t come true that night.

I remember listening to Into the Music as I drove out to Port Mahon along the Delaware Bay to do long runs while training for my one and only marathon in Montreal in 1979. Well, you get the idea. Whatever was happening in my life, there was always Van Morrison. And that’s still true today.

When I first heard Brown Eyed Girl, I had no idea just how restless and brilliant and contrarian and creative Van Morrison would turn out to be. Or that he would still be making vital music at age 71, and that I would still be listening to it in my 60s.

Today is Van’s birthday, and he’s celebrating his 71st year the same way he’s celebrated every year since 1964: By recording music and playing live shows. His new album, appropriately titled Keep Me Singing, comes out Sept. 30 and he’s already released a video of the first song off the record called Too Late:

Like Van said in Into the Mystic, it’s too late to stop now. That we have had this singular voice in our lives for so long, when so many others have been silenced prematurely, is our good fortune. 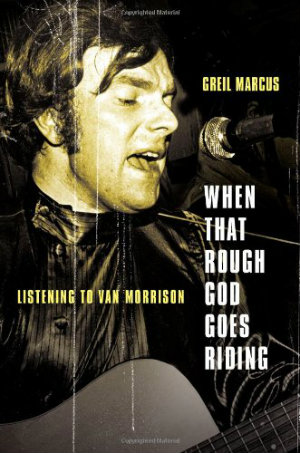 The renowned rock critic Greil Marcus, in his book of essays on listening to Van Morrison’s music titled When That Rough God Goes Riding, writes “Morrison may have the richest and most expressive voice pop music has produced since Elvis Presley, and with a sense of himself as an artist that Elvis was always denied. But what is that voice for?”

Marcus, a serious and scholarly critic with a contrarian streak as deep as Van’s, writes off large portions of Van’s catalog–especially the 15 albums over more than 15 years recorded from 1980 to 1996. Even writing about Van’s first solo album in 1967, Marcus sniffs: “The bright, bouncy Brown Eyed Girl was Morrison’s least convincing recording …” So much for Van’s only top 10 hit.

If you love Van Morrison’s music, as I do, reading When That Rough God Goes Riding will alternately elevate and infuriate you. That’s what great criticism is supposed to do: challenge your thinking and help you see things in a new light. Marcus’ book, which borrows its title from a song off the 1997 album The Healing Game, holds Van Morrison to a standard precious few could ever hope to attain and absolutely nobody could possibly maintain over a half century of writing and performing: the soul-searing peaks of revelation that mark his finest work.

Listen to what Marcus has to say about Astral Weeks, which has lost none of its astonishing power since its 1968 release:

It was forty-six minutes in which possibilities of the medium–of rock ‘n’ roll, of pop music, of what you might call music that could be played on the radio as if it were both timeless and news–were realized, when you went out to the limits of what this form could do. You went past them: you showed everybody else that the limits they had accepted on invention, expression, honesty, daring, were false. You said it to musicians and you said it to people who weren’t musicians: there’s more to life than you thought. Life can be lived more deeply–with a greater sense of fear and horror and desire than you ever imagined.

Better yet, listen to Astral Weeks, because what Marcus’ book does best of all is drive you back to the music. With Astral Weeks, Marcus writes, “Morrison’s music opened onto the road it has followed since: a road bordered by meadows alive with the promise of mystical deliverance and revelation on one side, forests of shrieking haunts and beckoning specters on the other, and rocks, baubles, traps, and snares down the middle.”

Since 1964, it has been one of the pure joys of my life to go down that road with him. And you know what? It’s too late to stop now. 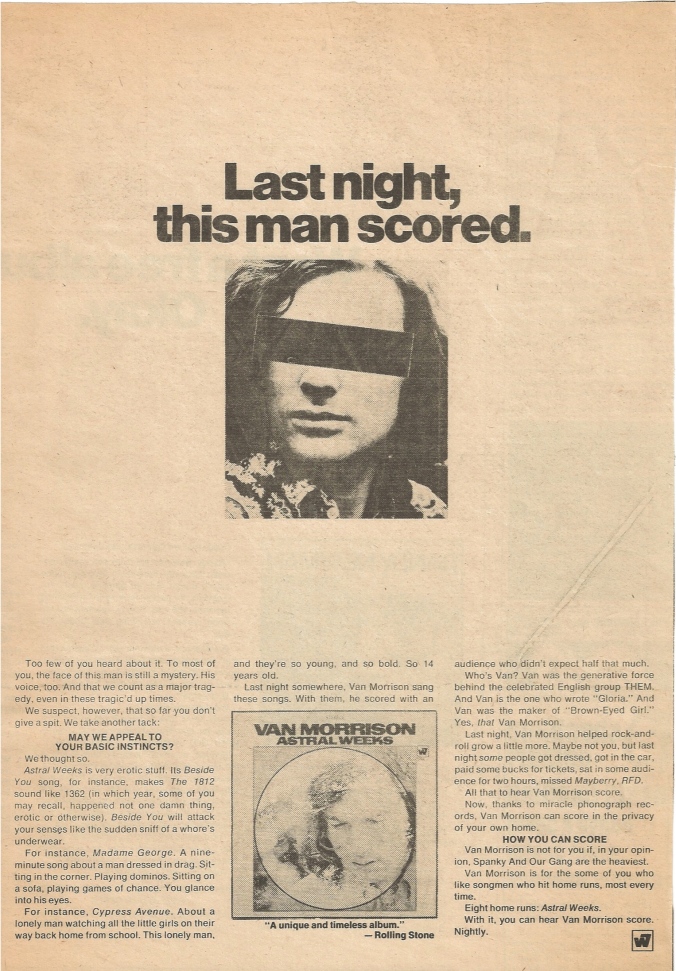 The Warner Brothers ad for Astral Weeks, from Rolling Stone magazine. I’ve kept it in the album sleeve for almost 50 years.

I saw this BBC special about Van Morrison when it aired in the early 1990s, and still have a VHS recording of it (although currently not a VHS player). The opening scene features Van and old friend Bob Dylan performing “Foreign Window” and “One Irish Rover”together on a hillside in Athens–two gods of rock mythology in the setting of the gods of Greek mythology. This clip also features Van and the Chieftans performing Raglan Road.

Van, in all his revelation.

If I should die in a car wreck, may I have Van Morrison on my tape deck.

One thought on “Van Morrison: Too Late to Stop Now”