I remember sitting in the kitchen of my parents home in Wilmington, Del., on that momentous March night in 1971, listening to the radio for the round-by-round bulletins from Madison Square Garden, where the Fight of the Century between Muhammad Ali and Joe Frazier was taking place.

I was rooting for Ali, just as I had rooted for Joe Namath over Earl Morrall and Johnny Unitas in Super Bowl III the year before, and just as I would root two months later for Marty Liquori over Jim Ryan in the Dream Mile at Franklin Field.

Like so many of my generation, I favored the brash, colorful, anti-establishment types, whether in sports, music, movies, TV, or writing. Lennon over McCartney. Jack Nicholson over John Wayne. The Smothers Brothers over Bonanza. And Norman Mailer over … well, just about everybody else. In my mind, then and now, Mailer was to writing what Ali was to boxing: simply The Greatest.

So when news came over the radio waves that Frazier had rocked Ali in the 15th round, sending him to the canvas, I felt disoriented and queasy. Sure, Ali had gotten off the canvas to finish the fight, but Frazier was the new heavyweight champion of the world. The only consolation was that it was clear even from listening to the fight that it had lived up to the hype, that it was truly something special. 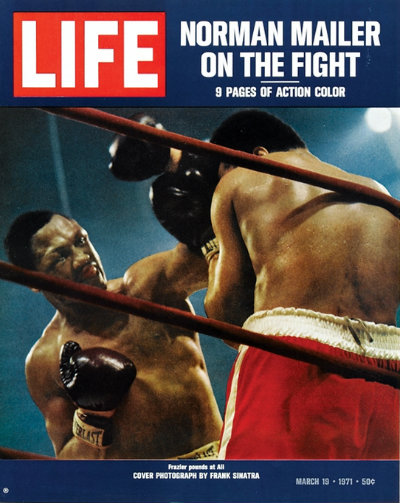 So was the piece that Mailer wrote about it—10,000 words written in two days, which appeared first on the pages of LIFE magazine under the headline “Ego” (with ringside photography by Frank Sinatra) and, a month later, as a $1 Signet Special paperback titled King of the Hill. It’s a breathtaking exposition on Ego, boxing, African-American identity, what it means to be a man, and, yes, The Fight. That Mailer framed the article around the construct of Ego, which he called “the central phenomenon of the 20th Century,” makes perfect sense. After all, it was Mailer who wrote early in his career:

The sour truth is that I am imprisoned with a perception which will settle for nothing less than making a revolution in the consciousness of our time.

Even Mailer, in his later years, admitted he had failed to achieve that revolution, but it wasn’t for lack of effort or Ego.

Mailer had an abiding admiration for prizefighters and the price they paid to contend at the highest levels, and he brought a pugilist’s mindset to writing. He even had his friend José Torres, a former light heavyweight champ and Boxing Hall of Famer, school him in boxing in exchange for instructing Torres on writing. Yet, Mailer only wrote one other book about the sport he loved passionately—the highly acclaimed account of the 1974 Ali-Foreman Rumble in the Jungle in Zaire, titled The Fight.

It is a splendid book, one of the best ever on boxing, but I have always preferred Mailer’s coverage of the first Ali-Frazier fight. The piece is classic Mailer, brimming with passion, energy, intelligence, immediacy, and sheer audacity. The fact that it holds up so well 45 years later is a testament to Mailer’s genius. As we mourn the passing of Ali today at the age of 74, it is worth remembering how Mailer described him in the aftermath of the Fight of the Century:

He is America’s Greatest Ego. He is also … the swiftest embodiment of human intelligence we have had yet, he is the very spirit of the 20th Century, he is the prince of mass man and the media.

While Ali was certainly one of the most polarizing figures of his time, with his embrace of the Nation of Islam and principled refusal to fight in the Vietnam War, the fight against Frazier in Madison Square Garden changed the way America saw him and set him up to become the most popular athlete in the world.

The stakes couldn’t have been higher, and Mailer saw it clearly as the fight happened:

Yes, Ali had never been a street fighter and never a whorehouse knock-it-down stud, no, it was more as if a man with the exquisite reflexes of Nureyev had learned to throw a punch with either hand and so had become champion of the world without knowing if he was the man of all men or the most delicate of the delicate with special privilege endowed by God. Now with Frazier, he was in a sweat bath (a mudpile, a knee, elbow, and death-thumping chute of a pit) having in this late year the fight he had sorely needed for his true greatness as a fighter six or seven years ago, and so whether ahead, behind or even, terror sat in the rooting instinct of all those who were for Ali for it was obviously Frazier’s fight to win, and what if Ali, weaknesses of character now flickering to the surface in a hundred little moves, should enter the vale of prizefighting’s deepest humiliation, should fall out half conscious on the floor and not want to get up. What a death to his followers.

But when Ali did, in fact, wind up on the floor in the fight’s final round, he summoned the courage to get up and was still standing as the bell rang. And long before Ali-Frazier II, or the Rumble in the Jungle, or the Thrilla in Manilla, or carrying the Olympic torch in Atlanta all those years later, Mailer saw the future:

The world was talking instantly of a rematch. For Ali had shown America what we all had hoped was secretly true. He was a man. He could bear moral and physical torture and he could stand. And if he could beat Frazier in the rematch we would have at last a national hero who was hero of the world as well …

For more than four decades, that’s exactly what we’ve had in Muhammad Ali: a national hero who was hero of the world as well, the most recognized and beloved athlete on the planet. His final years were marked by quiet dignity in the face of debilitating disease, and he remained a beacon of perseverance and principle and pride, a shining symbol of freedom to the end.

And now he’s gone. But Ali’s legacy is assured, here in the land that had such a passionate love-hate relationship with him, and around the world. In terms of Ali’s continuing ability to inspire and challenge, death has no sting. Which shouldn’t come as a surprise, considering it can’t float like a butterfly, either.

I grew up in White Plains, New York, in the 1960s, reading Pete Hamill’s columns in the old New York Post. It’s hard to imagine now, after all these years of Rupert Murdoch’s right-wing bludgeoning, but at the time, the Post was the great liberal, working class tabloid, featuring the best writing I’ve ever seen in a newspaper. Hamill, who holds the distinction of being the only person to serve as editor-in-chief of both the New York Post and the New York Daily News, was a huge influence on my decision to go into newspapers in the mid-1970s, and I have read almost everything he’s written—newspaper columns, magazine articles, novels, essays, screenplays and more—over the years.

I also grew up listening to Frank Sinatra on WNEW-AM which was always on the radio in our kitchen, especially when the legendary William B. Williams was on the air with his Make Believe Ballroom. Sinatra was one of the first things my father and I agreed on, and it remained a shared bond until he died.

So it’s no surprise that my favorite book about Frank Sinatra is Pete Hamill’s Why Sinatra Matters, originally written in 1998, shortly after Sinatra died, and re-released last fall as part of Sinatra’s 100th birthday celebration. If you love Sinatra, this book is indispensable.

At just 180 pages, it’s a book you will come back to year after year, and each time, it will reveal new insights about the man and his music. It’s not a biography. It’s really more of an extended essay, a very personal perspective not only on why Sinatra matters, but why he will continue to matter. As Hamill writes:

The music remains. In times to come, that music will continue to matter, whatever happens to our evolving popular culture. The world of my grandchildren will not listen to Sinatra in the way four generations of Americans have listened to him. But high art always survives. Long after his death, Charlie Parker still plays his version of the urban blues. Billie Holiday still whispers her anguish. Mozart still erupts in joy. Every day, in cities and towns all over the planet, someone discovers them for the first time and finds in their art that mysterious quality that makes the listener more human. In their work all great artists help transcend the solitude of individuals; they relieve the ache of loneliness; they supply a partial response to the urging of writer E.M. Forster: ‘Only connect.’ In their ultimate triumph over the banality of death, such artists continue to matter. So will Frank Sinatra.

“That mysterious quality that makes the listener more human.”

I have never read or heard a better description of Sinatra’s genius, and why his music has mattered so much to me almost my entire life. This is an intimate book, one that takes you into the smoky backroom at PJ Clarke’s as Sinatra holds court, and into the back seat of a limousine as it rolls through Central Park in the wee small hours of the morning in New York. On the pages of Why Sinatra Matters, you encounter an artist and a man you will like very much, as Hamill did.

You will love this book for its passion, its honesty, its keen appreciation of art, history, and culture, and perhaps most of all for the understated brilliance of lines like this: “If you loved someone who did not love you back, you could always walk into a saloon, put your money on the bar, and listen to Sinatra.”

One of my prize possessions: a signed copy of Why Sinatra Matters, with words to live by.

So today, as we mark the 18th anniversary of Sinatra’s passing, listening to his timeless music still represents the ultimate triumph over the banality of death. William B. Williams is long gone, but living in the Philadelphia area, I’m lucky enough to have the ageless Sid Mark still on the air in his 59th year doing an all-Sinatra radio show. (You can listen live on soundsofsinatra.com Sunday mornings from 9 a.m.-1 p.m.)

Since the anniversary of Sinatra’s death falls on a Sunday this year, Sid was on the radio this morning, as he has been for almost six decades, talking about his old friend and playing his music for fans young and old.

I’m also spending time today with Pete Hamill’s wonderful book. Hamill turned 80 last year; I turned 60. Both of us grew up listening to Sinatra on our parents’ radio. So did my daughters. (With Sid Mark filling the role that William B. Williams played in my parents’ home in White Plains.)

I have no doubt that in the decades to come, future generations of listeners will grow up discovering and embracing that mysterious quality that makes them more human.

This is a very good interview with Pete Hamill on McGraw Milhaven’s radio show on St. Louis station KTRS on the 100th anniversary of Sinatra’s birth.