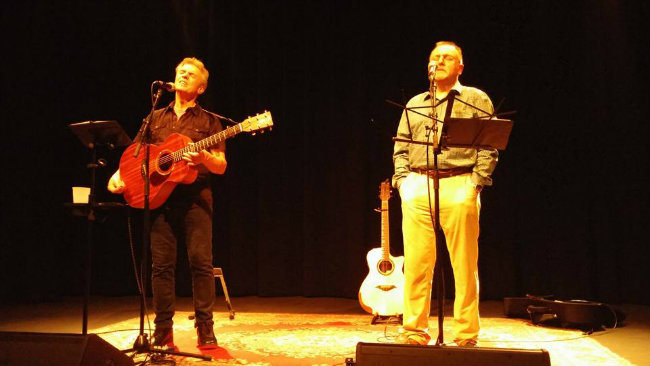 Iain Matthews, left, and Andy Roberts perform at  the Sellersville Theater in Sellersville, Pa., during their tour supporting “Reinventing Richard: The Songs of Richard Farina.”

This spring, singer-songwriter Iain Matthews and multi-instrumentalist Andy Roberts, performing as Plainsong, toured the U.S. together for the first time since 1971. That was the year Matthews, with Roberts playing acoustic guitar on the studio sessions, released his debut solo album, the brilliant If You Saw Thro’ My Eyes, featuring two songs by the preternaturally gifted songwriter and novelist Richard Fariña.

That album was my first exposure to Fariña, which seems only fitting, since for most of my life, I have seen—or, more precisely, heard—Fariña’s songs through Iain Matthew’s recordings. Of course, in 1971, Fariña had already been dead five years.

This Saturday, April 30, marks the 50th anniversary of Fariña’s fatal motorcycle crash on a winding, fog-shrouded road along the California coast outside Carmel. Half a century gone, to paraphrase Phil Ochs, who was part of the Greenwich Village folk scene in the early 1960s along with Fariña, Eric Anderson, Dave Van Ronk, Joan Baez, and a guy named Dylan, among many others.

At the time, I was a huge fan of Ochs, especially, and Dylan, but somehow missed out on Fariña entirely. I was hardly the only one. 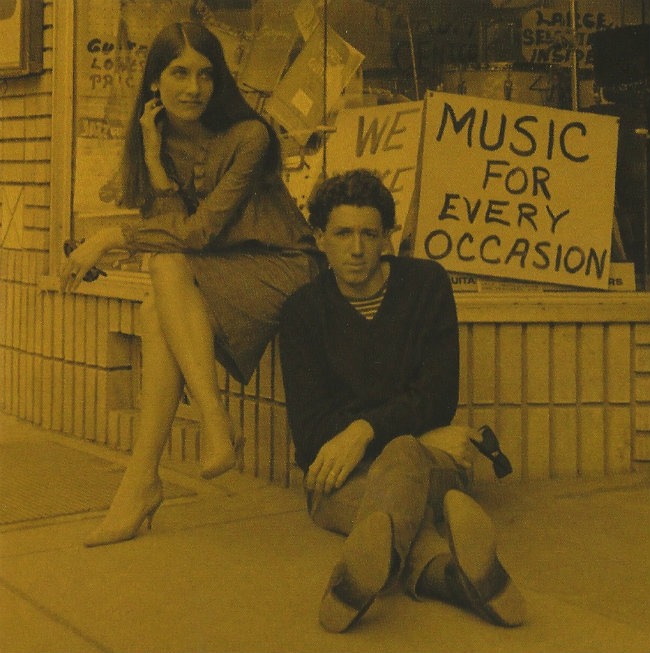 A folksinger, songwriter, novelist, poet, playwright, and raconteur with few peers, the guy Bob Dylan wanted to be and friend of author Thomas Pynchon, Fariña was just 29 when he died. He and his wife, Mimi (Joan Baez’s younger sister; they shared both radiant beauty and radiantly beautiful voices) had two Vanguard records to their credit, and just two days before his death, his novel Been Down So Long It Looks Like Up to Me was published by Random House. In fact, he had been to his first book signing for the novel right before going to a surprise 21st birthday party he threw for Mimi, where he hopped on the back of a Harley with a guy he barely knew, handed his car keys and wallet to Mimi, and roared off into the evening, never to return.

The novel was a literary tour de force, one that caused his former Cornell classmate and friend Thomas Pynchon to write him a letter exclaiming, “Holy shit man. How would ‘holy shit’ look on the book jacket? What I mean is you have written, really and truly, a great out-of-sight fucking book … I will get up something phrased more acceptable to the family trade and all. But to you, wild colonial maniac, about all I can say is holy shit …”

The reclusive Pynchon, a pallbearer at Fariña’s funeral, later wrote a heartfelt and highly personal remembrance and appreciation of his friend in the introduction to the 1983 Penguin Classics edition of Been Down So Long.

Reading Fariña’s book, which the San Francisco Examiner astutely wrote put him in “the company of Kerouac, Kesey, and Pynchon,” and listening to the fewer than three dozen songs he recorded, it is tantalizing to ponder what further wonders he might have unleashed on the world had he not impulsively climbed onto that Harley.  Instead, for most of the past 50 years, Fariña has been remembered, if at all, as a cult artist from the Swingin’ Sixties.

It took David Hajdu’s critically acclaimed 2001 book Positively Fourth Street, which tells the story of the Village folk scene through exquisitely drawn accounts of the lives of Dylan, Baez, and Richard and Mimi Fariña, to bring Fariña and his prodigious talent into focus.

Through the years, Iain Matthews, who first staked his claim as one of the finest vocalists of his generation as a member of Fairport Convention on their early albums, has quietly kept Fariña’s eternal flame flickering, recording several of his songs on solo and Plainsong albums and performing them in venues around the world. 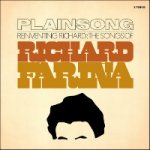 Last fall, Plainsong—which originally formed in 1972, disbanded, reunited in the 1990s, and then went out on a farewell tour in 2012—went back into the studio to record Reinventing Richard: the Songs of Richard Fariña. Released last fall, it’s the reason Matthews and Roberts returned to America to play together for the first time in 45 years.

Here they are, from a recent house concert, performing Mimi and Richard Fariña’s best-known song, “Pack up Your Sorrows.”

The duo’s return to the States was well worth the wait. The new album lives up to its ambitious title by liberating the songs after being trapped in amber for 50 years on Vanguard Records, which I don’t believe has ever even remastered the two albums Richard and Mimi Fariña recorded while he was alive—Celebrations for a Grey Day and Reflections in a Crystal Wind—or the third, posthumous record released after his death, simply titled Memories.

As wonderful as it was seeing Matthews and Roberts playing together, breathing new life into Fariña’s catalogue in a recent show at the Sellersville Theater in Sellersville, Pa., my hope—and I’m guessing theirs as well—is that the album will inspire generations born long after Fariña’s departure from this world to check out his music and his writing. Just as Matthews learned of Fariña through legendary record producer Joe Boyd (Fairport Convention, the Incredible String Band, Pink Floyd, Nick Drake, REM, and so many others), and just as I learned of Fariña through Iain Matthews.

I remember buying Iain’s second solo album, Tigers Will Survive, in the early 1970s, and being blown away by House Un-American Blues Activity Dream. I noticed the songwriter was the same guy who wrote two songs I loved on Matthews’ first solo recording—Reno, Nevada and Morgan the Pirate—and I wondered who this mystery man was and what else he had written.

Of course, the internet was barely a gleam in Al Gore’s eye at the time, so I managed to piece together an idea of Fariña as viewed through a glass darkly, from visits to record stores and the odd story in a music magazine. Thankfully, it’s all so much easier now.

There are only a few televised performances of Mimi and Richard Fariña that have survived, mainly from a short-lived Pete Seeger folk music TV show called Rainbow Quest. This one features Richard on harmonica, Mimi on guitar and Seeger on banjo, all having a ball with “Joy ’round My Brain,” released on the Memories album.

It was years after I was first introduced to Fariña through Iain Matthews that I learned Matthews had actually first started singing Reno, Nevada while he was still with Fairport, at a time when he went by Ian MacDonald and the band still had its original female vocalist, Judy Dyble (who was replaced by Sandy Denny, the tragic queen of British folk-rock.)  Check out this three-song 1968 video (Morning Glory, Time Will Show the Wiser, and Reno, Nevada), featuring Iain and Judy on vocals with a searing psychedelic guitar solo by an impossibly young Richard Thompson. Reno, Nevada starts at about the 7:00 mark.

Most of the time, I still feel like I can only glimpse Fariña through a glass darkly. He’s been dead 21 years longer than he was alive. Twenty-one … the age Mimi was celebrating on Richard’s last day on earth.

But there are times—listening to Plainsong’s Reinventing Richard or the other songs Iain Matthews covered through the years, or reading Been Down So Long It Looks Like Up to Me, or going back to the three records Mimi and Richard left behind—when I see him more clearly.

I had one of those experiences this week listening to a 51-year-old album in my car. I got lost in the interplay between Richard and Mimi’s voices, and by the interweaving of what Andy Roberts called Fariña’s “dulcimer with attitude—not folk-style, or pseudo-classical—but a full throated folk rock strum that drove his and Mimi’s music like a banshee”  and Mimi’s sophisticated, creative acoustic guitar. The result was a sound that Richard once characterized as “weaving modal memories.”

It was a cool, grey spring morning. The album was Celebrations for a Grey Day. And that’s exactly what it felt like.